Houthi terror chief among 20 killed as coalition strikes back 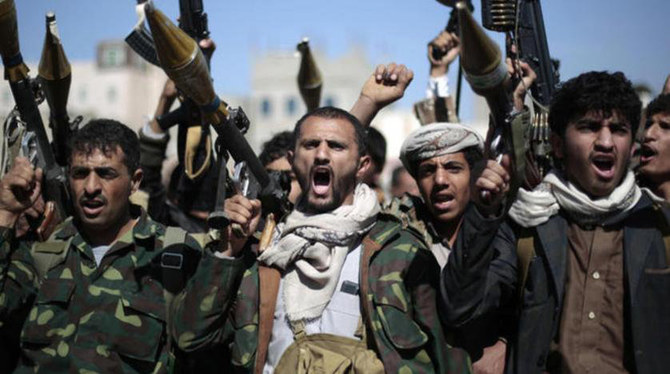 JEDDAH, 20 Jan 2022 [Fik/News Sources]: A Houthi terrorist chief was one of about 20 people killed on Tuesday when airstrikes by the Coalition to Restore Legitimacy in Yemen struck militia targets in Sanaa.

Abdullah Qassim Al-Junaid, the head of the Iran-backed militia’s aviation academy, had been sentenced to death in his absence by a court in Marib last year on charges of staging a military coup and committing war crimes.

Tuesday’s airstrikes targeting Houthi camps and strongholds in the Yemeni capital were the heaviest in nearly three years. They followed a Houthi drone attack on Monday on an oil storage depot on the outskirts of UAE capital Abu Dhabi, in which three people died, and the launch of eight armed drones from Yemen to Saudi Arabia, which the Kingdom’s air defenses intercepted and destroyed.

After Monday’s drone strike the UAE said it reserved the right to respond to “terrorist attacks and criminal escalation,” and Saudi Crown Prince Mohammed bin Salman and Abu Dhabi Crown Prince Sheikh Mohammed bin Zayed Al-Nahyan agreed in a phone call to “jointly stand up to these acts of aggression.”

The US vowed to hold the Houthis accountable for the attack, which was also condemned by the UN, the EU, Britain andFrance, and throughout the Gulf and the wider Middle East, including Israel.

Bennett said: “I have ordered the Israeli security establishment to provide their counterparts in the UAE with any assistance, should you be interested. Israel is committed to working closely with you in the ongoing battle against extremist forces in the region, and we will continue to partner with you to defeat our common enemies.”

The attack on Abu Dhabi came as the Houthis suffered a series of military defeats in the Yemen war, including a lengthy battle in which they were driven out of Shabwa province by the UAE-trained Giants Brigades. That defeat dealt a blow to the Houthis’ campaign to capture the battleground province of Marib, the government’s last stronghold in the north.

“There is no end in sight for the Yemen war,” said Elisabeth Kendall, a researcher at the University of Oxford’s Pembroke College. “Rather, the conflict is escalating.”

However, she added: “The UAE will not rush to a knee-jerk reaction. It has invested heavily in Yemen, particularly in new political and military infrastructure in the south. It is unlikely to veer from its long-term strategy… on the basis of a provocation.”