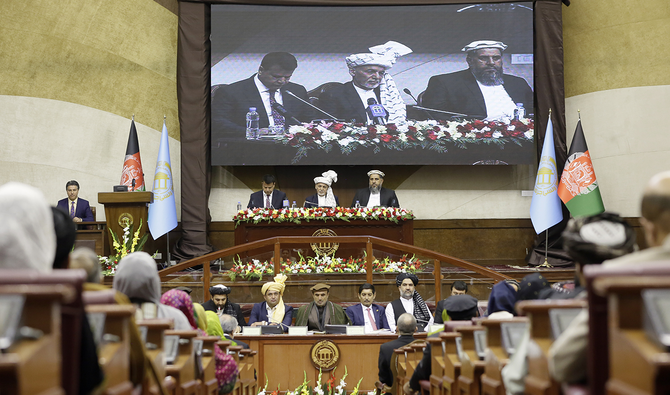 KABUL, 10 Mar 2021 [Fik/News Sources]: Kabul was on Tuesday said to be considering an offer from Russia to host talks on the stalled Afghan peace process, two days after the leak of a letter from US Secretary of State Antony Blinken to President Ashraf Ghani over the impasse.

Blinken’s letter had included an urgent proposal to help restart discussions between the Afghan government and the Taliban.

But Gran Hewad, Afghanistan’s foreign ministry spokesman, on Tuesday told Arab News: “We have received an invitation from the government of the Russian Federation addressed to the leadership of the government of Afghanistan for participation in this conference and are aware about their invitation of other national personalities and political leaders.

“We will soon begin consultations on what sort of decision we take on it. We appreciate the efforts of the Russian Federation’s government with regards to peace.”

Besides Taliban and Afghan government emissaries, the March 18 meeting in Russia will also host delegates from the Afghanistan High Council for National Reconciliation (HCNR), factional and influential leaders, and representatives from the US, China, and Pakistan.

Feraidoon Khawzoon, a spokesman for HCNR Chairman Dr. Abdullah Abdullah, told Arab News: “The meeting will be discussions on finding ways for resolving Afghanistan’s problem. The leadership of the HCNR have been consulting (among each other) about this invitation and will decide later on it.”

Officials in Ghani’s administration could not confirm if an official Afghan government representative would be attending the meeting. The Taliban were also unavailable for comment.

Russia’s offer to host the conference comes a week after US special envoy for Afghanistan, Zalmay Khalilzad, shared a proposal with key Afghan leaders, including Ghani, for the formation of a participatory government – which would include Taliban members – as part of efforts to end Washington’s engagement in Afghanistan, the longest war in American history.

Khalilzad’s proposal was circulated ahead of a May 1 deadline for the complete withdrawal of US-led foreign troops from Afghanistan, based on a controversial accord signed between former American President Donald Trump’s administration and the Taliban more than a year ago.

Moscow, similar to Iran and Pakistan, has been pressing for the pullout of foreign forces from Afghanistan for years. Russia recently hosted two rounds of talks between the Taliban and influential national leaders, besides being a vocal supporter for forming a new government to replace Ghani, whose second term ends after four years.

Ghani has repeatedly said that he is against the idea and vowed to oppose the set up “at the cost of my life.” His resistance promoted Blinken’s letter to Ghani – a copy of which was published by several media houses on Sunday – asking the Afghan president to “develop constructive positions” on Khalilzad’s proposals to “jumpstart the flailing peace process.”

The letter pressed upon the urgency for a new government in Afghanistan to break a stalemate in the intra-Afghan talks, which began in Doha, Qatar, between the Taliban and Kabul government representatives in September and have been riddled with disputes.

The US secretary of state has been pushing for a UN-facilitated conference with international stakeholders, including proposals to arrange a discussion between the Taliban and Kabul to form a negotiated settlement and enforce a cease-fire.

The letter also made it clear to Ghani that US President Joe Biden’s administration continued to consider a “full withdrawal” of the 2,500 troops from Afghanistan by the May 1 deadline, as negotiated by the Trump administration during a controversial deal signed with the Taliban in February last year.

“I must also make clear to you, Mr. President, that as our policy process continues in Washington, the US has not ruled out any option. We are considering the full withdrawal of our forces by May 1, as we consider other options,” Blinken said.

Some of the letter’s proposals included the formation of a participatory government that would eventually transfer power to a permanent government “following the adoption of a new constitution and national elections.”

In a speech on Saturday, however, Ghani said that the “transfer of power after the election is a principal for us that will not be compromised.”

Afghan Vice President Amrullah Saleh reiterated the stance on Monday when he said: “The West and America have the right to decide about their troops in Afghanistan, but it is also our right not to make a deal and compromise on the destiny of 35 million Afghans based on others’ timetable.”

Shortly after Saleh’s statement, Afghan Foreign Minister Mohammad Haneef Atmar adopted a softer tone, and told the BBC that the letter was “not a matter of concern for Kabul. We allowed for this in our diplomacy – that such contacts are made; therefore, I don’t see it as a type of offense or indifference.”

The minister added that government leaders would “debate on the letter and proposal, discuss it with national leaders and offer a response later.”

Meanwhile, a senior government official, who wished to remain anonymous, told Arab News on Tuesday that the leaked letter had “reduced Ghani’s status” and “if the US proposal fails due to the government’s opposition, the Taliban will benefit, and there will be a more regional realignment in support of the group.”

The official added: “Ghani may have found himself more isolated at home and in the region because Russia, like the US, two permanent members of the UN permanent Security Council, also backs creation of a new government here.”

Torek Farhadi, an adviser for the former Afghan government, told Arab News: “Russia has been complaining since it left Afghanistan about militants seeping into Central Asia.

“Russia has experienced its own share of terror attacks in the Moscow metro and elsewhere. Russia has complained about the lack of control in northern Afghan borders for narcotics out of Afghanistan. Superpowers (the US and Russia) have rivalries, but they are capable of coordinating wisely when they need to,” he said.