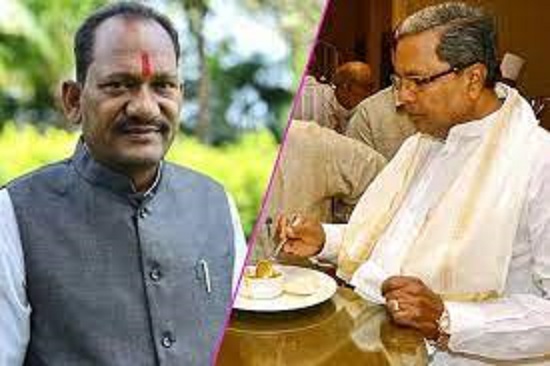 BENGALURU, 04 Dec 2022 [Fik/News Sources]: Karnataka Minister for Animal Husbandry Prabhu Chauhan on Saturday challenged Congress’ Opposition leader Siddaramaiah to consume beef in his presence, adding he would then see to it that the former chief minister is sent to jail.

He made the remarks while responding to a question on Siddaramaiah’s statement “if Congress returns to power, he will take back the Cow Slaughter law enacted by the ruling BJP”.

Addressing Siddaramaiah, Chauhan questioned: “Who is he to revert the Cow Slaughter law?”

“You state that you will cut and eat cow, if you have guts do it in front of me, I will see to it that you are sent to prison,” he said.

Cow slaughtering has come down in the state after the implementation of the Karnataka Prevention of cow slaughter and cattle preservation act, he said.

He further stated that the accused in cases of cow slaughtering will be awarded imprisonment of 2-7 years. Also, a fine between Rs 50,000 to Rs 10 lakh would be imposed.

“There are no losses due to the law banning cow slaughter. Congress is spreading false rumours in this regard,” he added.

The Minister further said that the Congress is opposing the government without any base.

“After becoming minister, I am taking care of cows. For the first time in the country, ambulance for the cattle has been launched in Karnataka,” he said. — IANS