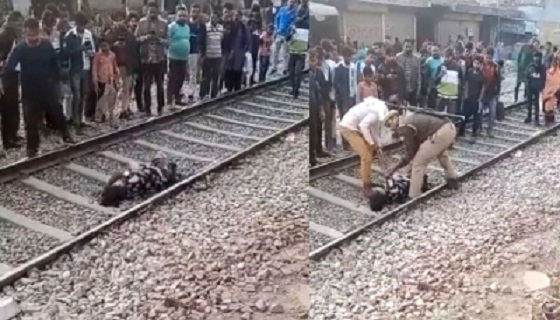 KANPUR, 04 Dec 2022 [Fik/News Sources]: A 17-year-old vegetable vendor lost his legs after he was run over by a train while he was trying to pick up his weighing scales that were allegedly thrown by the police on the track in Kalyanpur area of Uttar Pradesh’s Kanpur district, police said.

The victim, Arsalan a.k.a. Laddu, was referred to the Sanjay Gandhi Post Graduate Institute of Medical Sciences (SGPGIMS) in Lucknow, after his condition was reported to be critical.

An inquiry has also been set up in the matter.

His family members alleged that Arsalan was selling vegetables on the GT Road side next to Kalyanpur crossing when Sub-Inspector Shadab Khan and Head Constable Rakesh Kumar misbehaved with Arsalan and later threw his weighing scales on the railway track.

Arsalan got scared and did not understand anything and as soon as he went to pick up his scales on the track, he got hit by a speeding MEMU train and both his legs got amputated.

As soon as the information about the matter was received by senior police officials, DCP West reached the spot.

During preliminary investigation, the allegations that the vendor was beaten up and later his scales were thrown on the railway track, were found to be true.

“The role of the accompanying Sub-Inspector is also being probed,” said the DCP, adding, “The investigation into the case has been given to Kalyanpur ACP Vikas Pandey.”

Meanwhile, doctors have said that Arsalan’s condition has worsened due to excessive loss of blood along with amputation of his legs.