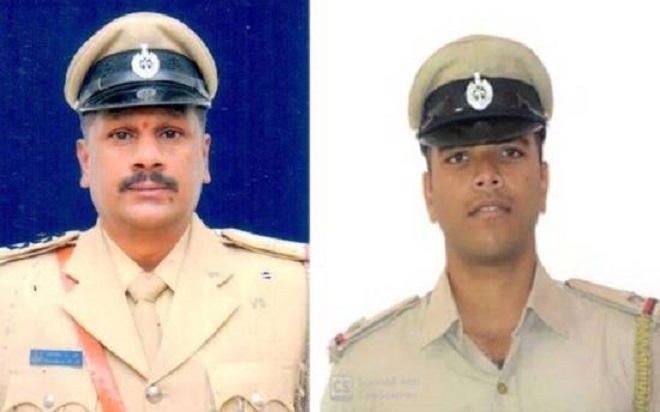 Bhatkal, 04 July 2022 [varthabharati]: The Karnataka State Human Rights Commission (KSHRC) has recommended a departmental enquiry and fine of Rs. 50,000 against two police personnel including a Sub-Inspector for brutally beating a man during COVID lockdown who had stepped out of his house to fetch medicine for his mother.

The Commission has also recommended “strict action” against Bhatkal Town Circle Inspector Divakar for dereliction of duty for allegedly not initiating action when the complainant had arrived at the police station after the incident.

In his complaint, Irshad had stated he had stepped out of his house to buy medicine for his mother around 7 pm but he was brutally assaulted on the streets by PSI Bharath Kumar and his driver constable Kuber even after repeatedly telling them he had been to buy medicine.

Irshad had sustained serious injuries on his right thumb which was bleeding and had blood clotting on his waist. He also alleged that he was misbehaved with at the Bhatkal Town Police Station by the police personnel when he and his brother-in-law visited to file a complaint.

The complaint also added that Irshad was subjected to three months of bed rest after the assault.

The Commission has recommended the government pay Rs. 50,000 to the victim and has asked it to be deducted from the remuneration of Bharath Kumar and Kuber apart from instituting departmental enquiry against them. It also recommended strict action against CPI Divakar for dereliction of duty.

When Vartha Bharati contacted Bhatkal CPI Divakar to get a comment, he added he was yet to receive the copy of the order and refused to comment on the matter. The order however was issued dated 16 June 2022.

Victim Irshad welcomed the observations and recommendation of KSHRC and thanked RTI Activist Raghuvendra who took up the matter and worked tirelessly to get him justice. He also added those found guilty should be punished and strictest action should be taken against them.

The Commission has sent its order copy to Karnataka Additional Secretary to the Government and Karnataka DGP asking them to submit a report of the action taken before 15 August 2022 to the commission.