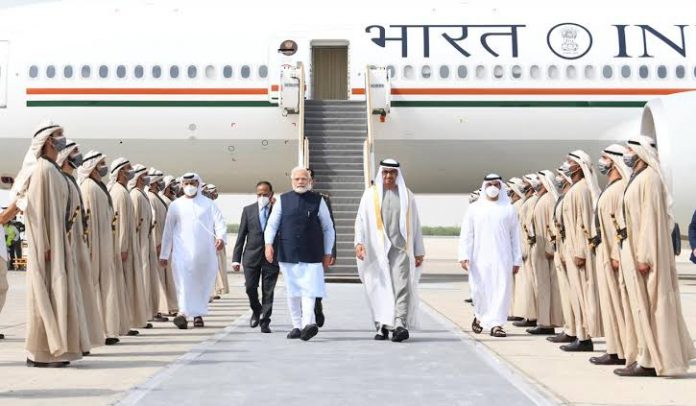 New Delhi, 29 June 2022 [Fik/News Sources]: Prime Minister Narendra Modi on Tuesday made a brief stopover at Abu Dhabi on his return from Germany and was received and sent off at the airport by UAE President and Abu Dhabi ruler Sheikh Mohamed bin Zayed Al Nahyan.

This was the first in-person meeting between the two leaders since August 2019 when the Prime Minister visited Abu Dhabi. The main purpose of the visit was for Prime Minister to convey his personal condolences on the passing away of Sheikh Khalifa bin Zayed Al Nahyan last month.

He also congratulated Sheikh Mohamed on his election as the third President of the UAE and becoming the ruler of Abu Dhabi.

Both leaders reviewed various aspects of the India-UAE Comprehensive Strategic Partnership which they have carefully nurtured over the past few years.

At a virtual summit on February 18, both countries signed the Comprehensive Economic Partnership Agreement, which has since entered into force on May 1, and is expected to further boost trade and investment between both countries. Bilateral trade in FY 2021-22 was about $72 billion.

The UAE is India’s third largest trade partner and second largest export destination. The UAE’s FDI in India has continuously increased over the past few years and currently stands at over $12 billion.

During their virtual summit, both leaders had also released a Vision Statement which has laid the roadmap for bilateral cooperation in coming years in diverse areas including trade, investment, energy including renewable energy, food security, health, defence, skills, education, culture and people-to-people ties. Both leaders expressed satisfaction that India and the UAE continue to forge closer partnership in these areas building on their close and friendly relations and historical people-to-people connect.

The India-UAE have a strong energy partnership which is now acquiring new focus on renewable energy.

The Prime Minister thanked the UAE President for taking great care of the 3.5 million Indian community in UAE, especially during the Covid-19 pandemic. He also him to visit India at an early date.— IANS