Death toll at 73 in Bangladesh floods 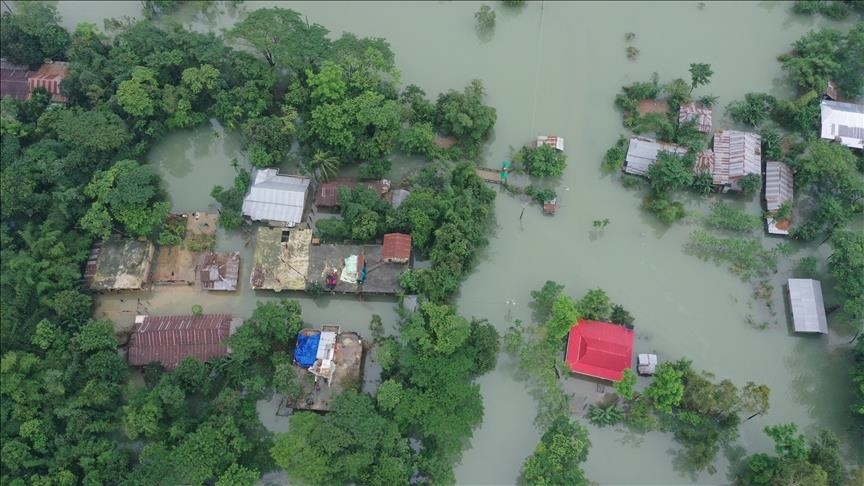 The disaster in parts of the country is deteriorating due to the onrush from upstream in India.

Forty-nine fatalities were reported from drowning while the rest died in flood-related cases, including lightning strikes, snake bites, diarrhea, skin diseases and landslides.

Millions are still inundated and stranded in remote areas as they wait with children and the elderly for relief items.

Rina Begum, 45, a resident of a remote area of Balaganj sub-district in the northeastern border district of Sylhet, has been living at the house of a neighbor with her five children.

The widow left her mud house more than a week ago.

“I haven’t had any material relief until now. There is no way to move from here to any nearby shelter as the communication system has fully collapsed,” Begum told Anadolu Agency with the help of a mobile phone of a relative.

Like Begum, hundreds of thousands of people in flood-hit remote areas have been stranded for more than a week without relief.

Mohammad Shajahan, 40, has been stranded in another remote part of Balaganj with his three daughters in his mud house which is at risk of being washed away.

“Is it our sin to give birth in this area in a poor family?” Shajahan asked while speaking to Anadolu Agency.

“We have been surviving for the last couple of days just drinking rainwater. We want a permanent solution to this disaster,” he said, underlining the plight of residents in the area.

Deputy Commissioner of Sylhet, Md. Mojibur Rahman, told Anadolu Agency that the government has allocated ample relief items for affected people. But due to the communication disruption, some stranded in the remote areas could not be reached.

“We have allocated 1,400 metric tons of rice and hand cash of 270 million Bangladeshi Taka ($3 million) and 13,000 packets of dry food only for Sylhet district. All other affected districts have been provided almost the same,” said Rahman.

He said officials could not reach distant areas due to the depth of floodwaters and a complete disruption of communication.

“Today we visited a remote area in Balaganj. Some people came to us crossing waist-deep water. We did not get down anywhere in the area as there was no dry land,” he said.

The worst flood in the 100 years in the country’s northeastern region has improved slightly in parts but is still deteriorating in others.

“The water level in the River Surma is slightly decreasing while the water in Kushiara part is increasing due to the flow of water coming from upstream Barak River of India,” said Rahman.

The River Barak, a major river in India, has flown through the states of Manipur, Nagaland, Mizoram and Assam and entered Bangladesh from the northeastern border.

To date, the worsening floods have affected 13 districts in Bangladesh, marooning huge croplands and affecting life for millions of people -- many of whom experienced another massive flood last month.