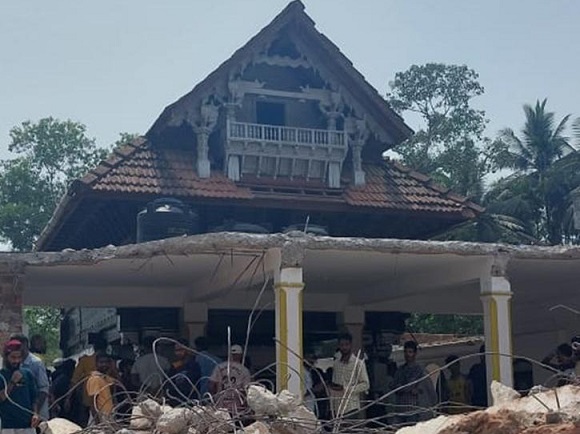 Mangaluru, 25 May 2022 [Fik/News Sources]: Tension is building up in the communally sensitive Mangaluru region after Hindutva activists staked claim to the 700-year-old Jumma masjid in Malali village near Ganjimath area on the outskirts of the city. The Vishwa Hindu Parishad (VHP) has started an agitation claiming the structure to be a Hindu temple on the basis of the design of a section of the old woodwork. Mosque committee members however said that the structure was built using the Indo-Arabic style which is common across the coastal region.

Even as Mangaluru Commissioner N Shashi Kumar, clamped prohibitory orders under section 144 CrPC near the Malali mosque on Wednesday, the VHP and Bajrang Dal held a Hindu ritual and a pooja inside the Rama Anjaneya temple, located 500 metres away from the mosque.

During the ‘Tambula Prashne’ ritual that started on Wednesday morning, a Kerala-based priest Gopalakrishna Panikkar claimed that because of some conflict, the sanctum sanctorum of a temple was shifted from the place where the mosque currently is and if everyone does not come together and ‘correct’ it, the city will suffer. The priest, who is also an astrologer, has claimed that there might have been a Shiva temple but says that he cannot ‘determine’ the real reason for its destruction.

‘Tambula Prashne’ is a common occult practice in coastal Karnataka and parts of Kerala where priests, who claim to have a channel to the ‘netherworld’, perform rituals to invoke the spirits of ancestors. The Hindu activists also plan a "Ashtamangala Prashne", after Tambula Prashne, as the next step to ascertain the history of the mosque.

The Hindu activists from the Vishwa Hindu Parishad (VHP) and Bajrang Dal had claimed that they will find out the truth about the mosque, following which Mangaluru Commissioner N Shashi Kumar clamped prohibitory orders surrounding the Assayed Adbullahil Madani mosque at Malali.

General Secretary of the mosque, Sarfaraz Malali, has said that the mosque was built in the Indo-Arabic style, which is prevalent in coastal Karnataka and Kerala. “The wood carvings at the Malali mosque are also prominent at the Zeenath Baksh Jumma Masjid in Mangaluru. “Hindus and Muslims have lived in harmony here for hundreds of years. This new claim is an attempt to politicise and communalise,” he added.

The Hindu activists have also started the movement for "taking back" Srirangapatna Jamia Masjid in the Mandya district. They have already submitted a memorandum to the district administration urging them to conduct verification of the masjid along the lines of the Gyanvapi mosque. They have stated that if the government does not respond, they will approach the court. Hindu activists are claiming that the mosque has been built after razing down a Hanuman temple. The matter is under dispute and is being heard by a Varanasi court.