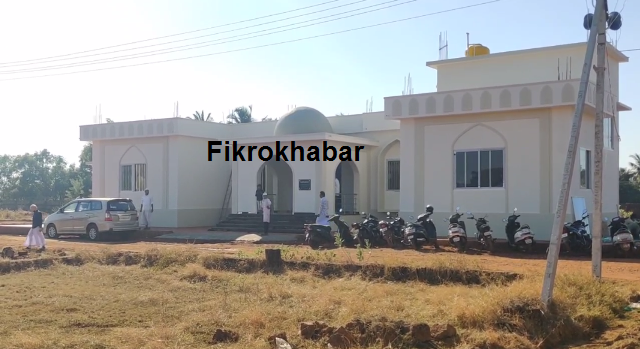 Bhatkal, 15 Jan 2022 [Fik/News Sources]: The inauguration of the Hajra Mosque with the Asr prayers took place in the new colony named Saudi Colony, established by the Bhatkal Muslim Jamaat-e-Sharqiya on Jali Road.

The first prayer offered in the mosque was led by Qazi Jamaat-e-Muslimeen Bhatkal Maulana Abdul Rabb Sahib Nadvi and the first adhan was given by Mr. Abrar Akrami.
Later in the afternoon, a short program was organized in which the city Qazis as well as Maulana Abdul Aleem Nadvi and President of Jamaat-e-Muslimeen Bhatkal Junab Mohtasham Abdul Rehman Sahib and those responsible for Bhatkal Muslim Jamaat-e-Sharqiya Mr. Younis Qazi, Mr. Naeem Eikeri and Mr. Muhammad Sadiq Palwar Etc. were present.

It may be recalled that this mosque has been given under the auspices of Jamaat-e-Muslimeen Bhatkal. And we have tried to make it easier for the members of the party who are unable to pay a lump sum to pay in installments. He also mentioned the names of many people who put the project into practice and thanked them. He also specially thanked the members of Pattan Panchayat for resolving the legal issues related to resettlement of this colony. Referring to the good news given by the party, he said that the most basic thing is that the Holy Qur'an has counted them among the believers as if their certificate of believer has been found in the world. Maulana congratulated the participants in the construction of this mosque.

Qazi Khalifa Jamaat-e-Muslimeen Bhatkal Maulana Khawaja Moinuddin Nadvi said that the leaders of the Eastern Region Jamaat are also to be congratulated in the sense that they have facilitated their members. Presented such a project which provided them a lot of facilities. Buying space in this time of inflation is not an easy task, the facility to pay in installments for its members is exemplary and those responsible deserve congratulations. Maulana also gave the message to do deeds for the pleasure of Allah. This is the construction of the house of God. Maulana also appreciated the gathering of Bhatkali friends. Mr. Naeem Ikeri, President of Bhatkal Muslim Jamaat-e-Sharqiya Sharqiyah expressed his gratitude.