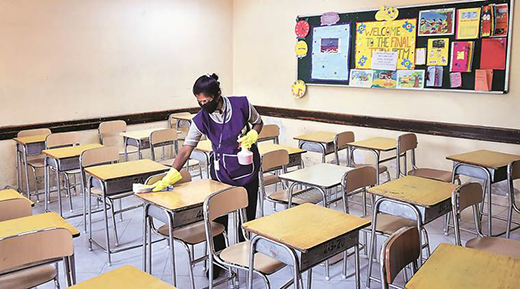 Bengaluru, 29 Sep 2020 [Fik/News Sources]: The reopening of colleges for the 2020-21 academic year has been delayed further following directions from the University Grants Commission.

However, the UGC has said that 1st semester classes can begin on November 1.

Deputy Chief Minister and Higher Education Minister C.N. Ashwathanarayan said that the re-opening of colleges will be delayed further following the UGC guidelines and also keeping in mind the rise in COVID-19 cases in the State. He said that a decision on reopening of colleges would be taken soon, and added that classes would not commence from October 1.

H.M. Sithara, Bengaluru district president, All India Democratic Students’ Organisation, welcomed the decision and said that offline classes should not commence until the number of COVID-19 cases reduce.

Principals of colleges and officials of universities pointed out that re-opening of colleges even from November 1 would be a challenge with the rise in number of cases in the State. “Irrespective of whatever precautionary measures we take, nothing will be sufficient. It is very difficult to expect students to maintain physical distance in a class,” said the Vice Chancellor of a State-run university.

The UGC has also said that all universities and colleges will have to follow directions from the Union and State governments, the Ministry of Education and University Grants Commission from time to time.

Universities need to follow a six-day week for the 2020-21 and 2021-22 academic years to compensate for the loss of academic days. They have also been told to curtail breaks and vacations so that students are awarded their degree on time.

S. Japhet, V-C, Bengaluru Central University, said that online classes for students from intermediate semesters had begun from September 1. However, he said that many students were finding it difficult to access gadgets and also facing Internet connectivity problems.

But Amaresh Kadagada, State president, Students’ Federation of India, said that many students were facing trouble with online classes. “We hope that the government will commence classes soon in the interest of students from rural areas. However, they need to ensure that all precautionary measures are taken,” he said.