Bengaluru: Rioters have no religion but ‘saviours of temples from rioters’ do 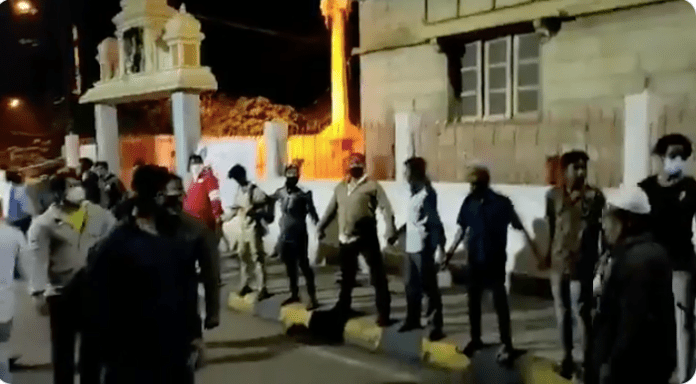 Bengaluru, 12 August 2020 [Fik/News Sources]: Hours after the riots broke out in Bengaluru over allegedly offensive Facebook post on Prophet Muhammad, where rioting Muslim mobs attacked police station and cops, a video went viral on social media. At around 2 AM on the intervening night of 11th and 12th August, Congress National Secretary and social media in-charge Zakiya Khan shared a video wherein she claimed that Muslim youth formed a ‘human chain’ to ‘safeguard’ a temple from ‘unruly mob’.

It is interesting to note that the Hindus perhaps never in their wildest imagination thought that someone will come and destroy their temples over a Facebook post. However, this ‘protecting the temple’ appears more of a soft-threat or a nudge that the temples can be demolished over a post that Muslims find offensive. This especially appears more terrifying after the lowkey threat by All India Muslim Personal Law Board on the eve of Ram Mandir Bhoomi Pujan where the Islamic body had cited example of Hagia Sophia and threatened how once a mosque will always remain a mosque, thereby implying how Ram Mandir which will be constructed where disputed structure once stood will be demolished by Muslims.

One social media user Muhammad Nuammir also shared the same video with the caption how this is the beauty of India.

Here again while ‘Muslims’ are creating ‘human chain’ to guard temple, Nuammir conveniently forgets to mention that the attackers were also their own Muslim brethren.

Congress leader Salman Nizami too referred to the rioters as ‘mob’ but ‘human chain protecting Hindu temples’ was made by Muslims.

News agency ANI too shared the video sourced from a localite wherein it referred to rioters as ‘arsonists’.

These ‘arsonists’ too didn’t have religion, but men making ‘human chain’ to ‘protect temple’ do.

However, many netizens raised concerns whether the above video was staged and a PR stunt especially by Congress as its leaders were the ones to push it to make it viral.

Another video from the same location has now surfaced where one can hear someone in the background urge the person shooting the video to ‘upload it fast’.

This casts aspersions on whether the video of ‘human chain’ by Muslims to ‘protect the temple’ was a mere publicity stunt after the rioters burned down the city over a social media post.