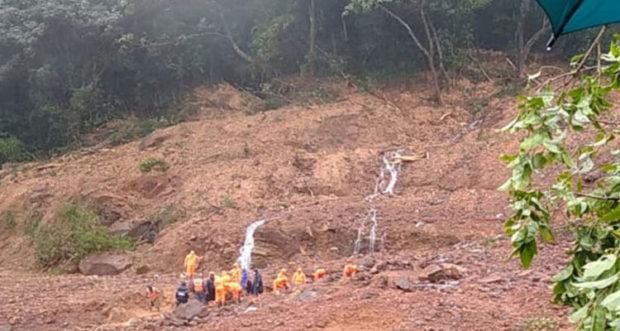 Bengaluru, 12 August 2020 [Fik/News Sources]: Sixteen people have died so far while four are missing in flood and landslide ravaged Karnataka, which has been witnessing torrential rains since the beginning of this month.

Several parts of Malnad, coastal and interior Karnataka have been battered by rains, affecting lives and property. According to official data, 16 people in 12 affected districts have lost their lives so far since August 1, while four are missing.

A total of 108 relief camps have been opened in these districts, where 3,244 people are taking shelter. Twenty-eight animals have perished in the floods. While 85 houses have been completely damaged, 3,080 have suffered partial damage, the data revealed.

In Kodagu, the body of Talacauvery chief priest Narayan Achar was recovered on Tuesday, about 2 km away from the spot of the landslide on August 5 night, in which his house was swept away. NDRF and authorities had been searching for five people, including Achar, who had gone missing due to massive landslides at Bramhagiri hills. The body was brought to Bhagamandala, where the post-mortem was conducted and later cremated in his private property.

Achar’s elder brother’s body was recovered on August 8. Kodagu district in-charge Minister V Somanna met Achar’s daughters who have come from Australia and later said that the search for three others, including the priest”s wife and two assistants, would resume tomorrow. Meanwhile,there are reports of a respite in rains in many places, especially in north interior parts, while showers are continuing at some places in coastal and Malnad regions.

While water levels have receded slightly in some places, several parts of Uttara Kannada and Belagavi, among others continue to be inundated, sources said. The Met Department forecast for the next 24 hours has said heavy rainfall is likely to occur at isolated places over coastal Karnataka and ghat areas of south interior Karnataka.

The Karnataka government on Monday said it has requested the centre to provide an additional special assistance of Rs 4,000 crore to handle the flood situation in the state. As per the initial assessment the government has estimated the loss to the tune of Rs 4,000 crore.