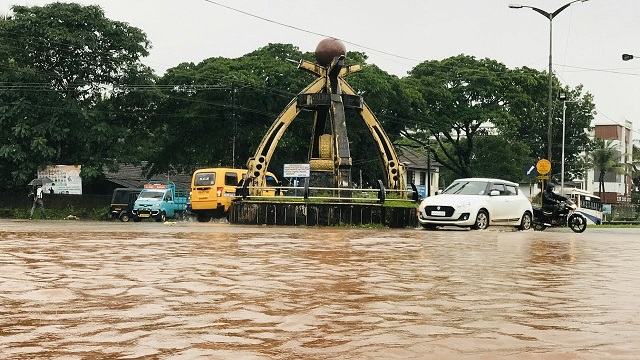 Heavy rains in Bhatkal today flooded rivers and canals. Water was stagnant and it was difficult for people to get out of their houses.

The IMD has predicted heavy rains in these districts till August 13.

Fishermen in the coastal belt of the state have been asked not to venture into the sea.

Kodagu district has already witnessed massive landslides, including the one in Brahmagiri near Talacauvery, where the chief priest of Talacauvery  temple and four others went missing. The rescue operation is still on.

Meanwhile, landslide along Charmadi Ghat has resulted in close of the route for a few days.

In red alerted seven districts of rain-ravaged Karnataka where one more death was reported on Sunday, taking the toll to 13.

A total of 23 animals have perished in the rains which destroyed 31,541 hectares of crops while inundating 35,000 hectares of horticultural crops.

The State government has released Rs 50 crore as an initial amount to carry out relief and rehabilitation work.