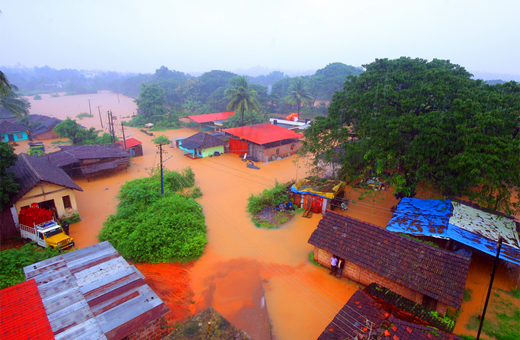 Mangaluru, 09 August 2020 [Fik/News Sources]: After two days of reprieve, rain pounded the coastal districts in all its fury from Friday night, leaving many areas on the river banks inundated, with Udupi and Dakshina Kannada (DK) receiving 123 mm and 101 mm of rain, respectively, in the last 24 hours till 8.30am of Saturday.

The rain affected regions at the foothills of the Western Ghats were the worst affected, with Kervashe and Marne, both in Karkala taluk in Udupi, receiving 208 mm rain. In DK, Mardhala in Puttur taluk received 201.5 mm rain.

Due to heavy rain in Bantwal and Uppinangady, houses in low-lying areas, especially close to river banks, got inundated, forcing people to flee from their homes. The water level in the Nethravathi River at Bantwal and Kumaradhara River at Uppinangady were nearing danger levels due to heavy rain in the upper reaches of the ghats. AMR dam, Thumbe vented dam, Disha dam at Kadaba and Neerakatte dam got filled to the brim, and their gates were opened to allow excess water to flow out.

The Kumaradhara river was in spate, due to which the Kukke Subrahmanya bathing ghat remained submerged even on Saturday. Traffic continued as normal on roads leading to Kukke and other areas, due to the three newly built bridges. The officials on Saturday engaged an excavator to remove the tree branches that were blocking the vents of a dam on the Kapila River at Shishila. This area being at the foothills of the Western Ghats, gets debris in the form of tree trunks or branches when it rains heavily in the ghats, blocking the dam vents, and causing inundation of the area. The Udupi district administration has already sounded an alert to the people living near the Swarna River bank to be ready for evacuation, since the region was seeing heavy rain in the last 24 hours.

The KSNMDC bulletin stated that high waves in the range of 3.5m - 5.6m were forecast till Sunday along the coast from  Mangaluru to Karwar. It also stated that gales with speed reaching 50-60 kmph were likely to prevail along and off the Karnataka coast, and advised fishermen not to venture into the sea.