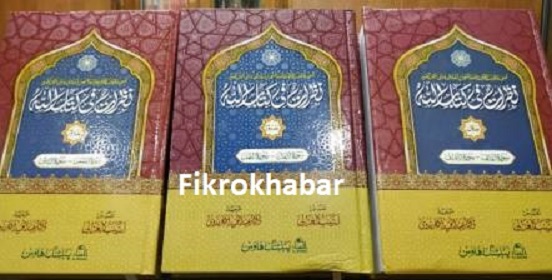 Bhatkal, 09 August 2020 [Fik/News Sources]: Zainab al-Ghazali is one of the most courageous women in Egypt who made great sacrifices for the development of Islam.

He also worked with Imam Hassan al-Banna Shaheed (may Allah have mercy on him). She is known to have had the privilege of visiting the Prophet of Allah four times in a dream. This was stated by Maulana Nasir Akrami Jami, the founder of Imam Hassan Al-Banna Al-Shaheed Institute.

Maulana told FikroKhabar that his famous Arabic translation of the Qur'an has been published under the name of Nazar-e-Kitab-e-Allah, which has benefited not thousands but millions of people.

Now Maulana Dr. Abdul Hameed Athar Nadvi, a famous religious scholar of Bhatkal and author and translator of more than a hundred books, has translated it into three volumes which has been published by Al-Manar with Dida Zeb printing.

A few copies of it are available at a discounted price at Imam Hassan Al-Banna Shaheed Institute, Madina Colony, Bhatkal