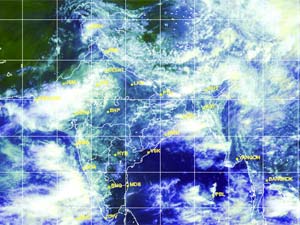 Bhatkal, 05 August 2020 [Fik/News Sources]: The Karnataka coast on Tuesday received erratic, but heavy rainfall, with gusty winds throwing normal life out of gear with widespread power outages due to tree fall and minor landslides in many areas of the coast. Meanwhile, Indian Meteorological Department has sounded a red alert for Uttara Kannada, Udupi and Dakshina Kannada districts 8:30am of August 5.

In the Coast, Uttara Kannada received the highest amount of rainfall at 91mm, followed by Udupi at 75 and DK at 73mm. The highest Rainfall of 241 mm was recorded at Castlerock, Supa Taluk in Uttara Kannada District.

KSNMDC bulletin stated that widespread moderate to heavy rains associated with strong surface winds at times and isolated very heavy to extreme heavy rains was likely over Udupi, Dakshina Kannada and Uttara Kannada districts It also stated that wind speeds ranging between 50kmph to 60 kmph was forecast along the coast of Karnataka from Mangaluru to Karwar, warning fishermen not to venture into the sea.

Mescom bore the brunt of the rains in Udupi and Dakshina Kannada District and at the last count as many as 148 electric poles, 23 transformers and 65 kilometer conductor wires were damaged due to poles being damaged in tree fall and landslides.