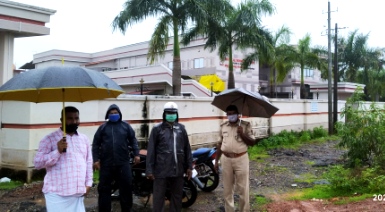 Bhatkal, 04 July 2020 [Fik/News Sources]: Meanwhile, the increasing number of corona patients in the city in the last few days is a matter of concern for the taluka administration and the people. The administration has now decided to treat Corona patients in the city, for which preparations are now in full swing at the Women's Center. According to Fikrokhabar, 100 beds are being arranged here for which items are being brought. Some items are yet to arrive from Hubli, which are reported to have arrived by nightfall.

Mr. Sadiq Mata, former president of TMC of the city, told Fikrokhabar that patients are being shifted here for better facilities. Asked when the patients would be shifted here, he said preparations were underway. Patients will be transferred here only after preparations are completed. It is believed that patients will be transferred here by tomorrow. He said that with the diagnosis of Corona, the patient is mentally disturbed and now efforts are being made to provide them more facilities so that they can be treated in a better way.