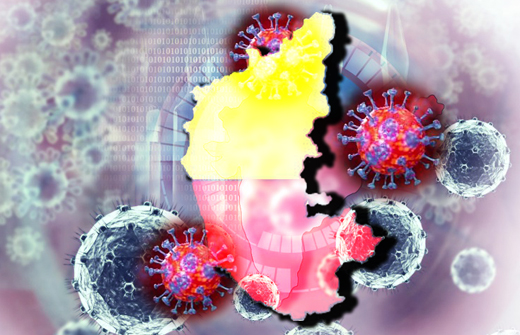 Bengaluru, 04 July 2020 [Fik/News Sources]: Karnataka on Friday reported its biggest single day spike of 1,694 new COVID-19 cases, taking the taking the total number of infections in the state to 19,710, the Health department said.

The state also recorded 21 fatalities pushing the number of deaths to 293.

The day also saw 471 patients getting discharged after recovery; even as 201 patients in the state were undergoing treatment in ICU. Of the 1,694 fresh cases reported on Friday, a whopping 994 cases were from Bengaluru Urban alone.

The previous biggest single day spike was recorded on July 2 with 1,502 cases.

As of July 3 evening, cumulatively 1,9710 COVID-19 positive cases have been confirmed in the state, which includes 293 deaths and 8,805 discharges, the Health department said in its bulletin.

The 21 dead include five from Bengaluru Urban, three each from Chikkaballapura and Kalaburagi, two each from Vijayapura and Shivamogga and one each from Ballari, Hassan, Davangere, Bidar, Raichur and Bengaluru Rural.

Those dead include those with the history of Severe Acute Respiratory Infection (SARI), Influenza-like illness (ILI), inter-state and inter-district travel and cardiac patients.

The contact history of at least four dead people is under tracing.

Out of 1,694 positive cases on Friday, contacts of the majority of the cases are still under tracing.

Among the districts where the new cases were reported, Bengaluru Urban accounted for 994, followed by 97 from Ballari