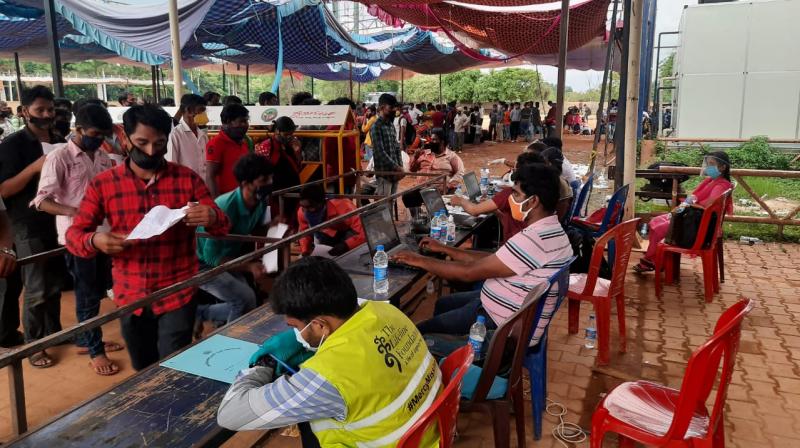 Bengaluru, 02 July 2020 [Fik/News Sources]: While the South Western Railway proudly boasts of running 258 Shramik trains with 3.79 lakh guest workers reaching their destination the wait for thousands of guest workers still stranded at Tripura Vasini grounds seems to have no end.

On Tuesday, over 600 guest workers after having lunch provided by the civic agency, Bruhat Bengaluru Mahanagare Palike (BBMP) were waiting for the information on the train but apart from a few clueless cops neither a registration desk nor an information board has been put up.

With no separate facility made for women at the temporary shelter house women feel uncomfortable.

One of the guest workers, Jameel (name changed) from Assam said that till yesterday the toilets were not cleaned and the garbage was strewn around.

“We know complex systems don’t work with piecemeal or bandaid. There is no evidence of accountability at any level, no one agrees they are in charge. Everyone passes the buck. People from several districts of the state have started coming. The migrants are dependent on volunteers like us. Moreover, there is no social distancing at the shelter camps,” said Rosemary Vishwanath, a volunteer with Bangalore with Migrants that is aiding the guest workers in reaching their destinations.

On Monday, the volunteers described the situation as a chaos. With no public address system at the place a crowd of over 3,000 people pushed themselves onto the registration desk and only three people were doing data entry. The police personnel deployed at the venue are stressed as they are clueless about the information on the train and it becomes unmanageable for them to control the crowd.

Apprising N Manjunath Prasad, principal secretary, revenue department and other nodal officers through a letter about the situation the civic volunteers have written that a help desk should be set up as the available ones are either switched off or the executive directs them to find a BBMP official.

“The complete lack of facilities continues and added to that is the lack of people to manage the basic functions of crowd management, registration, medical test, the lack of basic infrastructure like tables, medical staff, public address and any systems. The timings when the food will be served should be put up. The hall is like a furnace and it is suffocating. There is no electricity, only one generator is working , the other is not working , so the working generator is switched off in order that it does not get overheated,” the report read.

Due to lack of lavatories the pressure on a few toilets is huge. After a long overhaul the toilets were cleaned on June 29. Covid-19 is a huge risk at the cramped facility being provided but the volunteers fear that due to lack of basic facilities diarrheal and gastrointestinal diseases will also begin with minimal hygiene.

It is ironic that while the state government is publicising steps to contain Covid it flouts every norm when it comes to coming to aid the guest workers that are being vulnerable to the pandemic.