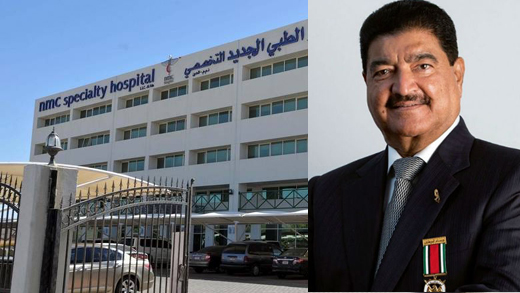 Bengaluru, 19 Feb 2020 [Fik/News Sources]: B.R. Shetty, founder of NMC Health, has resigned as the co-chair of the leading UAE healthcare group beset by a meltdown of its share value in the wake of certain allegations raised by short seller Muddy Waters and subsequent investor concerns.

In a regulatory filing on Monday to the London Stock Exchange, where NMC’s shares trade, the company said its chief investment officer Hani Buttikhi and another director also had resigned. The directors were linked to Shetty and other top partners.

When contacted by Khaleej Times, Shetty, who is in India, confirmed his resignation. "Yes, the news is correct. I have stepped down," he said without volunteering to elaborate any further.

NMC has lost four board members since Friday, including vice-chairman Khaleefa Butti, whose holdings are also being probed following allegations that major stakeholders might have misstated their stakes in NMC.

NMC stock, the worst performer on the FTSE-100 Index this year, fell as much as 9.2 per cent on Monday morning and then rebounded. They have fallen around 70 per cent in value since Muddy Waters’ claims in December.

Last week, NMC vice-chairman Khalifa Butti Omeir bin Yousef also stepped down from the board as NMC also said that there had been a series of complex shareholder dealings involving Shetty, Bin Yousef and another top investor, Saeed Butti Al Qebaisi.

Shetty, who founded NMC in 1975, also is involved with other ventures including Finablr, which has as its flagship unit UAE Exchange, Travelex and Express Money, Neo Pharma, BRS Ventures and BR Life.

Abdul Moiz Khan, CEO and managing partner, Fursa Consulting, said Shetty’s other business ventures in the UAE and India would not be impacted by the current turmoil. "Shetty continues as the chairman of UAE Exchange. I believe, investor concerns over NMC will remain company-specific and do not tag along other group companies and will not have any further negative impact on their business operations."

NMC, which operates the largest healthcare network in the UAE, has been bedeviled by allegations of incorrect finances and inaccurate reporting of major shareholders’ stakes ever since US short-seller Muddy Waters targeted the company last year.

Muddy Waters has said it was placing NMC on its shortlist after alleging that it identified serious defects at the company that had gone unnoticed in the preparation for the London IPO. The short seller raised doubts on NMC’s asset valuations, levels of debt, executive remuneration and agreements with counterparts.

NMC refuted Muddy Waters’ claims as false and hired former FBI Director Louis Freeh to conduct an independent review. The review is due to be completed before the company issues its financial results in March.

NMC, which became the first Abu Dhabi company to list in London in 2012, lost almost half the value of its share in the first week of February on speculation the company’s main investors faced a margin call, in which banks seize shares pledged as collateral. NMC said on Friday that First Abu Dhabi Bank and Al Salam Bank Bahrain obtained 20 million shares in the company from BRS International Holding, an investment vehicle of NMC’s top shareholders. The banks sold more than eight million of those shares as "enforcement of security," NMC said.

Last week GKSD Investment Holding of Italy confirmed on that it was "in the preliminary stages of considering" an offer for the embattled healthcare group. However, private equity firm Kohlberg Kravis Roberts & Co LP (KKR), which NMC had named as a prospective bidder, denied any intention to make an offer.