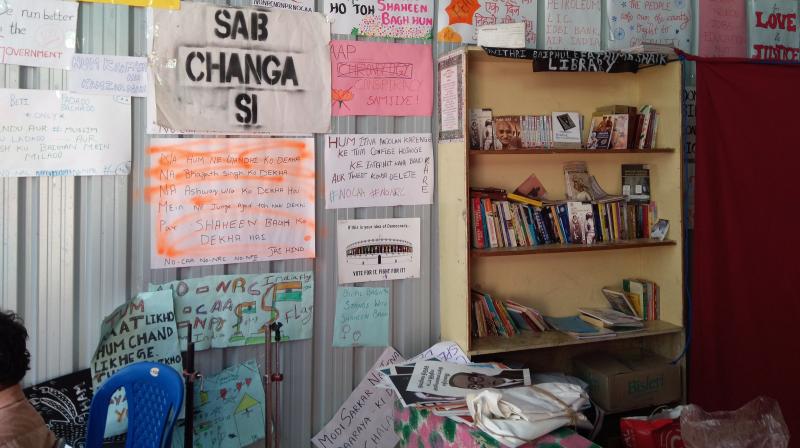 Bengaluru, 17 Feb 2020 [Fik/News Sources]: Bilal Bagh, the venue of protests against the Citizenship Amendment Act (CAA) and National Register of Citizens (NRC), is slowly shaping up to be the Shaheen Bagh of Bengaluru.

Ever since the protest began a week and a half ago, fresh protesters are joining in every day, and a couple of days ago 200 books were donated to set up a temporary library.

Volunteers take turns to read to the children who come in, mostly stories about the Constitution and heroes of the freedom struggle such as Bhagat Singh and Mahatma Gandhi. Patriotic movies are shown at night, said a volunteer, Saqib Idrees.

The protesters have received support from several organizations such as those working towards rehabilitation of sex workers and from nuns from a church. Naseeruddin Shah, Jignesh Mewani and Ramachandra Guha have visited to express solidarity.

But there is always an apprehension of an incident like the shooting seen at Shaheen Bagh. “There is danger of such happenings but we’ll answer violence with love. No political party can hijack our protest. The protest is purely voluntary,” said Sayyed Sardar, another volunteer.

Sure, the police want them to go home. But the protesters want to give no cause to them to do anything more than grumble. “We have taken care not to block the path of pedestrians and commuters. We’ve taken up only a small space for our protest. We are not doing anything that is against the law and the protest will continue till the government takes back the CAA,” Sardar said.

Following the Shaheen Bagh precedent, the protesters here keep it politically correct. A large flag of India drapes one side of the tent under which the agitationists sit listening to the odd speech. A large banner declares the protest, replete with pictures of consensual personalities Mahatma Gandhi, Ambedkar and Bhagat with the addition of one of Tipu Sultan. The library is tucked away at the back, with a bookshelf containing a few dozen titles. The men sit on plastic chairs requisitioned from someone’s home. Sab changa si, shouts a posted pinned to the corrugated cladding on the side.