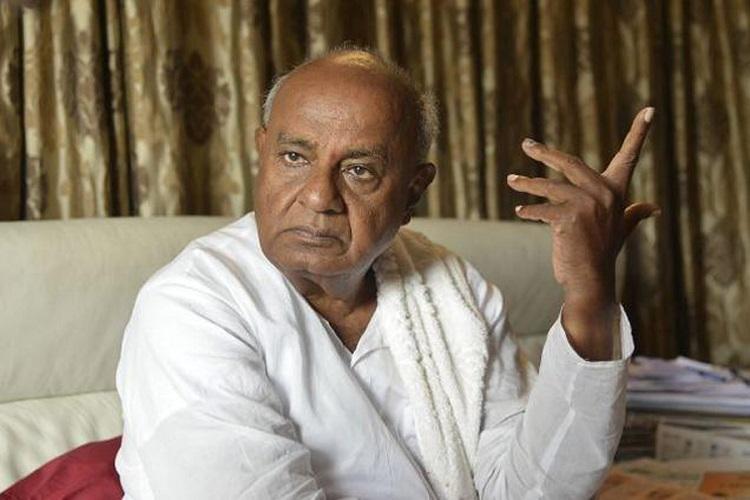 Bengaluru, 17 Oct 2019 [Fik/News Sources]: JD(S) patriarch H D Deve Gowda on Wednesday said his party would field candidates in all the 15 constituencies for the December 5 bypolls, following the Supreme Court’s decision on the status of disqualified Congress-JD(S) legislators.

The former Prime Minister also made it clear that there was no question of taking back three disqualified JD(S) legislators back into the party fold.

“The disqualified legislators case is likely to come up for hearing in the Supreme Court on October 22. Let’s see what will be the outcome from the court.

If the court upholds the decision of the then Speaker (to disqualify MLAs) elections will happen. If not, the bypolls may not happen as per schedule,” Gowda said.

Speaking to reporters here, he said his son and former Chief Minister H D Kumaraswamy had already spoken about the party’s decision to field candidates in all the 15 segments, and there were no differences within the party on this matter.

“There is a feeling among some people that JD(S) may only field its candidates in the old Mysuru region, where the party was strong…winning or loosing is another issue all together.

We are fielding candidates in all 15 constituencies going for the polls,” Gowda said, hinting that this would form the “groundwork” for JD(S) to contest local body polls from across the State.

Congress and JD(S), that contested the Lok Sabha polls in alliance and had run a coalition government in the state, have decided to go separate ways in the bypolls.

The bypolls to 15 of the 17 seats represented by disqualified MLAs, which the Election Commission had earlier decided to defer until the apex Court decides on their plea challenging disqualification, has now been scheduled for December five.

Among the 15 constituencies going for the polls, 12 were represented by Congress and three by JD(S).

The absence and resignation of the 17 Congress-JD(S) MLAs during the trust vote had led to the collapse of the Kumaraswamy headed coalition government in July, and helped BJP to come to power.

After examining the petition moved by leadership of both parties, the then assembly Speaker K R Ramesh Kumar had disqualified the 17 Congress and JD(S) MLAs under the anti defection law,which they have challenged in the Supreme Court.

The then Speaker had ruled that those disqualified cease to be MLAs with immediate effect till the expiry of the 15th assembly (in 2023).

In response to a question, Gowda also made it clear that there was no question of taking back three party disqualified MLAs- A H Vishwanath (Hunsur), K Gopalaiah (Mahalakshmi Layout) and Narayana Gowda (K R Pet).

“Three of them were there from our party.I’m not going to take them back…I will not entertain them and we are going to contest all the seats,” he added.

Playing down reports of an informal meeting of JD(S) MLCs, where they reportedly vented their ire at being “completely neglected” by the leadership, Gowda said he has called a meeting of party legislators (MLAs and MLCs), also former MLAs

and defeated candidates on October 18 to discuss legislative council polls for graduates and teachers constituency.

“I have not neglected anyone…I have called a meeting the day after tomorrow. They will hold the meeting and decide…you can see,” he added.