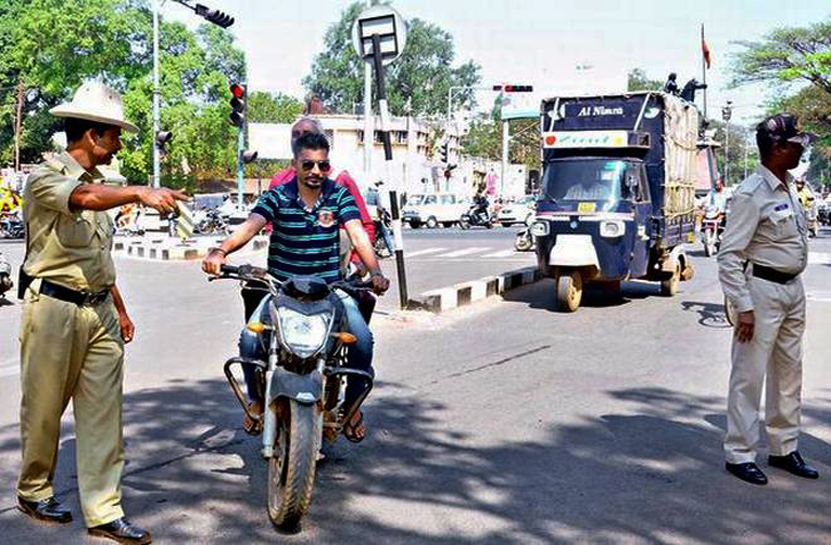 Kundapur, 22 Sep 2019 [Fik/News Sources]: Since the implementation of the new Motor Vehicles Act, that is from Sep 5th to Sep 20th, altogether 1,239 cases have been booked against rule violators and a total of Rs 6,73,700 has been collected in fines within Kundapur sub-division limits. Of this, the highest number of cases and fine collected was on Sep 16th at 241 cases and Rs 1.51 lakh respectively.

Since the new MVA was introduced into the state, police operation against traffic rule violators has gained pace. Along with the number of cases being booked, the penalty amounts are also rising.

With the drastic rise in fine value, vehicle users are waking up. Those who refrained from using helmets are wearing them and the number of vehicle users who used to fail to use seat belts, pay insurance or break other traffic rules are falling down. Those who do not have a drivers license are coming forward to make one as well as scores of vehicle users can be seen making a beeline to emission testing centres.

Of the total 1,239 cases booked in the last 15 days, most of those cases are regarding the use of motorcycles without wearing helmet. In the last 4 days within Kundapur sub-division limits, 81 cases of riding the motorbike without wearing a helmet have been booked.

How much on which day?

The motor vehicle act was implemented in Udupi district on Sep 5th and the number of cases and fines collected is as follows..

In Kundapur sub-division limits, a maximum of 21 cases were booked in a single day son Sep 16th and the total amount collected in fines was Rs 1.51 lakh. In that too, a highest of 57 cases and a total fine of Es 54,700 was collected within Byndoor police station limits on that day.

We are strictly following this rule for the welfare of the people. Through this, vehicle users are getting sensitized and the day-to-day numbers of cases are also reducing. This is a good development. The operations are being conducted in phases initially starting with two-wheeler, followed by four-wheeler followed by heavy vehicles – Hariram Shanker, ASP Kundapur