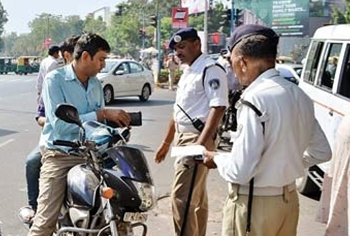 Chitradurga, 22 Sep 2019 [Fik/News Sources]: According to the notification, bowing to pressure from the public, the state government on September 21, Saturday cut the steep penalties for traffic offences that came into force under the Motors Vehicles Act 2019, with fines for some violations coming down surprisingly.   Officials claimed that the notification was issued hours before the code of conduct.

City traffic.jpgWhile Chief Minister B S Yediyurappa and Transport Minister Laxman Savadi had talked about following the Gujarat model, officials at the department said they took a cautious step by getting the clearance from the Law Department for the proposal.

“The notification does not follow the Gujarat model nor strictly complies with the Centre’s advisory on compoundable or non-compoundable offence. The state government has taken the decision based on a detailed discussion with law department,” a source said.

The fine for not wearing helmet or seat belt has been halved from Rs 1000 to Rs 500.  The penalty for failing to allow passage of emergency vehicles saw the biggest cut, with the fine coming down to Rs 1,000 from Rs 10,000.

Penalty for speeding also received a drastic cut. The new fine amount ranges from Rs 1,000 for light motor vehicles to Rs 2,000 for the bigger ones, instead of the earlier penalty of Rs 4,000.

Accordingly, the new notification has introduced a differential penalty in more offences for two-wheelers, auto-rickshaws, light motor vehicles (including cars) and high power vehicles, including trucks and lorries.

For example, the Rs 5,000 penalty for allowing unauthorised persons (including minors) to driver/ride a vehicle has been reduced to Rs 1,000 for two- and three-wheelers and Rs 2,000 for light motor vehicles.

Similarly, the Rs 5,000 flat penalty for the first offence of driving dangerously has been reduced to Rs 1,500 for two-wheelers and auto-rickshaws and to Rs 3,000 for LMVs while bigger vehicles will continue to pay Rs 5,000.

The state has retained the stiff penalities of MV Act against racing, carrying excess passengers and unauthorised interference with vehicle.