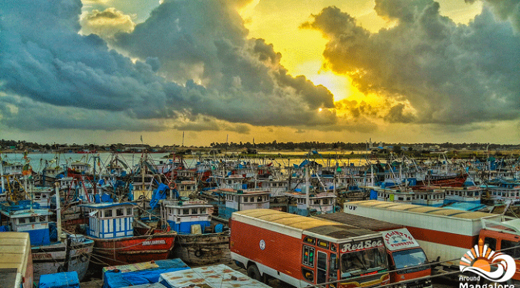 Mangaluru, 23 May 2019 [Fik/News Sources]: Majority of deep sea fishing boats have returned to harbour, at Old Port Bundar (Dakke)  before the fishing season ends as they are facing lack of catch too.  Fishermen have sent their labourers back and are waiting for the next fishing season which will begin from August 1.

The fishermen said Ade, Koddai, Pomfret, Mackerel and Kingfish are not available. “It has been four months since the market saw the arrival of sardine. With the ban on light fishing, purse seine boats have already returned from deep sea fishing,” they added.

“Trawl boats, which go for deep sea fishing for 10 days, don’t get fish in abundance when they return. If we catch fish at least worth Rs 6 lakh, in one trip, we can some manage. If we start incurring loss after loss, it is better to anchor the boats,” Trawl Boat Fishermen’s Association president Nithin Kumar told DH.

Kumar said, “We have to spend on diesel when we go in search of fish in the deep sea. If we are able to get the catch according to our search, it is well and good. As many as 1,050 boats go for sea fishing in Dakshina Kannada. In this, over 750 boats go for deep sea fishing. More than 200 boats have anchored before the fishing season ended.”

A majority of the labourers working in fisheries harbour are from Tamil Nadu and North Karnataka. They have been sent to their native places on holiday.

Fisheries College lecturer Jayaprakash Mendon said after the Ockhi cyclone that hit in August, ‘Klathi’ fish has made its presence in Western Coast. Normally, the fish is found in the Indian Ocean and fetches less price. The fish is used only in fish meal industries. As the fish makes a unique sound in the deep sea, all other fishes move away. Further, all good fishes get crushed under Klathi fish that are available in tonnes, he explained.

Kumar said the menace of Klathi fish may disappear after the monsoon and change in the flow of the river.