BJP fields no Muslim candidate from 162 constituencies in Rajasthan 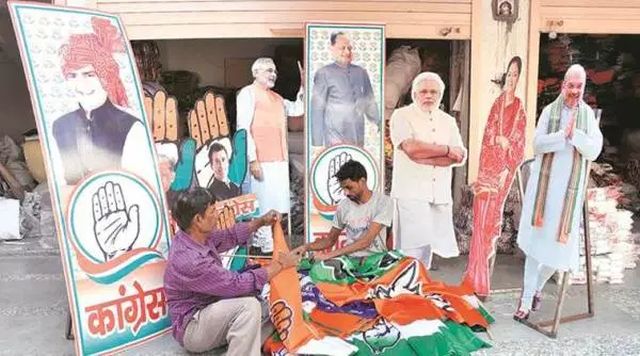 Jaipur, 17 Nov 2018 [Fik/News Sources]: In a move which brings out no surprise, out of the 162 BJP candidates, announced so far in two installments for the 200-member Rajasthan Assembly polling for which is due on December 7 there is not a single Muslim candidate, strengthening the perception that the party is playing the Hindutva card.

Mahesh Sharma, Union Minister of State for Tourism and Culture, who comes from Alwar, strongly denies the Hindutva slant, yet there are others in the party who say the BJP knows it well that Muslims in Rajasthan don’t constitute a vote bank.

One of the sitting MLAs, Habibur Rehman from Nagaur, on Wednesday joined the Congress when he failed to find his name in the list released on Sunday.

Rahman said the BJP is playing the Hindutva card in Rajasthan.

Another state minister Yunus Khan too failed to find his name. But, unlike Rehman, Khan has expressed his loyalty to the party.

Soon after the BJP released its first list of candidates, general secretary of BJP’s Minority cell M Sadiq had written to Prime Minister Narendra Modi expressing his concern as to how party members would reach out to the community if Muslims don’t get the party nomination.

The BJP in 2013 had fielded four Muslim candidates. Two of them were elected: Habibur Rehman from Nagaur seat and Yunus Khan from Deedwana.

“The BJP is a democratic party unlike the Congress where a board decides a candidate. The candidates are selected keeping in mind a variety of factors, including candidates’ strengths,” said Mahesh Sharma.

Avinash Rai Khanna, BJP’s Rajasthan election in-charge, said party candidates are shortlisted after ‘raishumari’ in consultation with grassroots workers as well as top leaders. He said the final BJP list is yet to come and until then no conclusion should be drawn on the composition of candidates based on caste and religion.

Rajasthan Congress vice-president Archana Sharma said, “The BJP could not perform in the state. Now they are trying to polarise the situation. But this won’t work… Rajasthan is no Uttar Pradesh.”

Salawat Khan, General Secretary, BJP Minority Morcha, said in the last elections, the party gave four tickets to Muslims. “So far we have not been given any party nomination. We are still hopeful that the party would consider candidates from the community,” he said. In 2013 polls, the BJP had swept 163 of 200 assembly seats in Rajasthan.