Convention on NRC : ‘Without coming on streets citizenship issue won’t solve in Assam’ 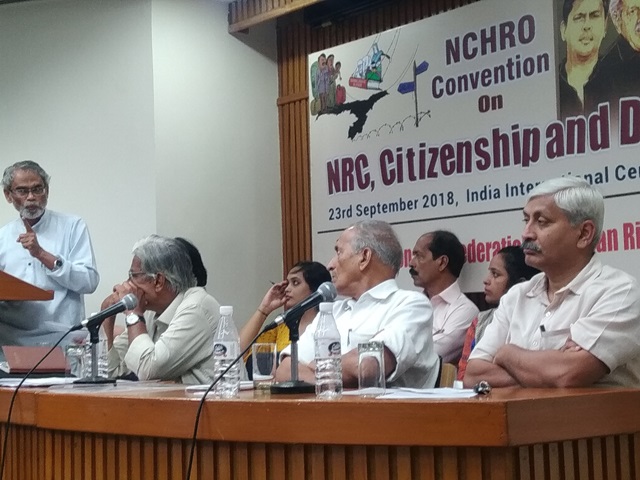 New Delhi, 24 Sep 2018 [Fik/News Sources]: Prominent activists, intellectuals and Assamese representatives at a convention on NRC held at India International Centre here on Sunday stressed the need of launching people’s struggle for citizenship issue in Assam. They said four million citizens, whose names did not get included in the final draft of NRC, should not be left only on the discretion of the apex court. While demanding the proposed Citizenship Amendment Bill, 2016 should be immediately dropped; they said it looks like a pilot project of the BJP  to divide people  on the basis of language and  religion as the ruling party has been indulging in false propaganda  on the issue.

Speaking at the seminar organized by the National Confederation of Human Rights Organizations (NCHRO), Ravi Nair, executive director of Asian Documentation Center said the Supreme court has sidetracked real issue on NRC and directed the authorities to  give second chance to those whose names not included in the final  to prove their citizenship.  Instead of hearing the issue of Constitutional validity of the NRC exercise which was the primary issue, the apex court has now directed to give second chance to prove citizenship, he said. Referring to late socialist leader, Ram Manohar Lohia, Nair said people need to hit the streets as without this struggle one cannot compel the parliament and government for decisions.

Echoing his views, Prof Aprovannad said BJP’s intentions are not any secret as its president Amit Shah dubbing all the 4 millions as “ghuspetiay’( infiltrators) which is  against  the ruling of  the Court. He said BJP chief’s statement cannot be taken lightly as he is not a fringe leader and holds considerable clout. Recalling  the speeches of Narendar Modi during run up to 2014 general election, he said first they (BJP) coined  “Bangladeshi” term and now” Ghuspaitiay” as BJP’s policies will push the country on the path of disintegration. He said now demands for NRC are being raised in whole of the north east.

Questioning the NRC exercise,  Prof V K Tripathi said the amendment in the Citizenship Act  in 2003 which states any one (i) born between 1950 and 1987 , irrespective of citizenship of the parents, is Indian by birth , (II)born between 1987 and 2003,  is Indian if one parent is Indian citizen.  Blaming the two RSS –minded Police officers who sowed the seed of hatred some four decades ago,  Prof Tripathi said he visited  Assam  and found that most of them who left out form the final draft  are from working classes. He said there should not be any discrimination on the basis of religion or language.

Dr   Taslim Ahmad Rehmani, National Secretary, SDPI, said it is purely a political issue to deprive Muslims and tribals from political power. Referring to Assami nationalism, he said RSS and BJP myopic policies are pushing north east away from the Indian nationalism.

It is an effort to make millions of people in Assam stateless on the dubious argument that they have no identity papers, he added.

Many people born and brought up in the state do not make into the NRC as it looks like a pilot project of the BJP and there are indications that it may use it to divide people on the basis of language or religion on the eve of 2019 general election.

More than four million people of Assam, almost all Bengalis and largely Muslims, are now made stateless after the release of the National Register of Citizens (NRC) on July 30, 2018. The home minister as well the coordinator of the NRC, Prateek Hajela had assured that this is not the final list and those who cannot find their name in the list may appeal again, of course, with relevant documents. The problem is the affected people are mostly illiterate and poor and it will be very difficult for them to follow the tedious procedures that are to be followed by an applicant who has lost his or her documents.

Passing a resolution, the seminar demanded that “ all those four million people left out of the registry should be given amnesty and should be treated as Indian citizens. Our constitution does not permit discriminating people on the basis of religion or language. There should not be any discrimination on the basis of religion or language. The proposed Citizenship Amendment Bill, 2016 should be immediately dropped.”

It also made demand that all those who are incarcerated in detention camps at present should be released immediately and separating a section of voters as ‘D’ voters is unconstitutional and should be stopped immediately.

The convention called upon people to come forward and join hands to defeat the fascist designs of the central and state governments under BJP.