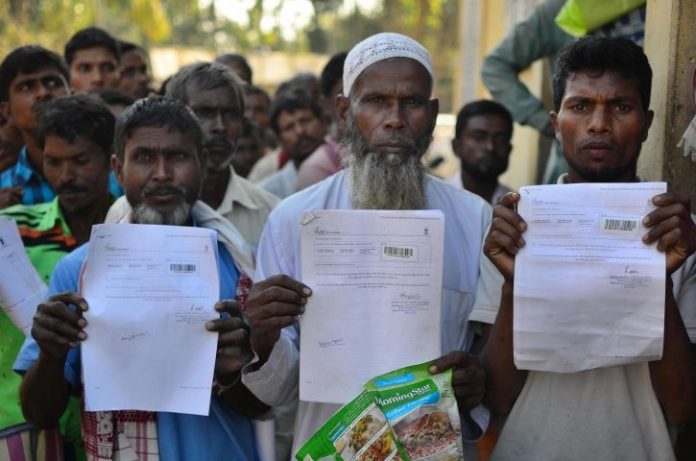 New Delhi, 26 Jun 2018 [Fik/News Sources]: CPI (M) on Sunday said it opposes any amendment based on the religious affiliation of the people to determine their citizenship. It also slammed the government for “deliberate discrimination” in the process of the updating of the national register of citizens (NRC) in Assam. The party also announced it would hold a national level convention for “popular interventions” to restore normalcy in Jammu & Kashmir.

The Central Committee of the Communist Party of India (Marxist) met in New Delhi from June 22 -24   which took stock of the four years of the Modi Government.

It observed that  “These four years of Modi Government has seen unprecedented attacks on people’s livelihood, the sharpening of communal polarization accompanied by murderous assaults on Muslims and the Dalits, the severe undermining of institutions of parliamentary democracy and independent constitutional authorities.”

It expressed grave concern over the updating process in Assam and the proposed amendment to the Citizenship Act on the basis of the religious affinity of the people.

The CC felt that “the proposed amendment to the Citizenship Act on the basis of the religious affinity of the people is straining the already fragile unity of the people in the state of Assam. Religious and linguistic minorities are under severe pressure due to incomplete and deliberate discrimination in the process of the updating of the national register of citizens (NRC) and the category of doubtful voters.”

Playing with emotive issues for electoral gains by the BJP/RSS is worsening the situation, it added.

On unfolding developments in Jammu and Kashmir following the imposition of Governor Rule in the state, the party announced that it would organize a national level convention will be organized for popular interventions to restore peace and normalcy in the state”.

The party also urged the government to urgently enforce confidence-building measures and start a political process through dialogue with all stakeholders.

It also slammed the PDP-BJP alliance saying it was untenable since the beginning.

“It was an alliance between forces that never saw eye to eye on any issue but came together in an act of sheer opportunism to share the spoils of office.”

The party urged the government of India to implement the CBMs and to initiate dialogue with all stakeholders as the situation in the state cannot be allowed to deteriorate further.

It also urged the government to resume dialogue with Islamabad.

“The Central Government must initiate talks with Pakistan to ensure cross-border terrorism is stopped by a mutually agreed ceasefire along the Line of Control. The situation in Jammu & Kashmir cannot be allowed to deteriorate further.”

It warned that with Governor’s rule now imposed, there is a “widespread apprehension” that the RSS-BJP will embark on a more “hardline position” under the pretext of combating terrorism.

“There are apprehensions of growing dangers of human rights abuses and violations of democratic rights of the people.  The effort appears to be to sharpen communal polarization not only in Jammu & Kashmir but to aid the process of consolidating the Hindutva communal vote bank elsewhere in the country in the run-up to the general elections.”

The CC said there is an “alarming increase in the overall atmosphere of hate-engendering violence across the country especially in BJP ruled states.”

“Apart from the violence perpetrated by private armies in the name of `cow protection’ and `moral policing’, incidents of mob lynchings and horrendous gang rapes and murders of minors are on the rise. … People’s constitutional rights are being allowed to be violated with impunity.”

It also noted with serious concern that there has been a concerted attack on organizations and individuals championing the rights of Dalits and those who had participated in the April 2 all India bandh called by various Dalit organizations, particularly in BJP ruled states of Madhya Pradesh, Uttar Pradesh, and Rajasthan.

The RSS-BJP has coined a new terminology of “urban Maoists” and five activists have so far been arrested under this garb for supporting the Dalit agitation, it said.

The party said the CC Committee also took note of the “massive loot of public money by certain corporate houses”.iIn addition to the over 2.5 lakh crore waiving off of defaulting loans by corporates from public sector banks in the first three years of the Modi government, it is now reported that an additional Rs. 1,44,993 crores were written off, it added.

The Central Committee called upon all Party units to organize protest actions on these issues.

The CC also discussed the rise in the prices of petroleum products, continued agrarian distress, ties with the USA alleging India surrenders its sovereignty, Karnataka elections, bye-elections and other issues.