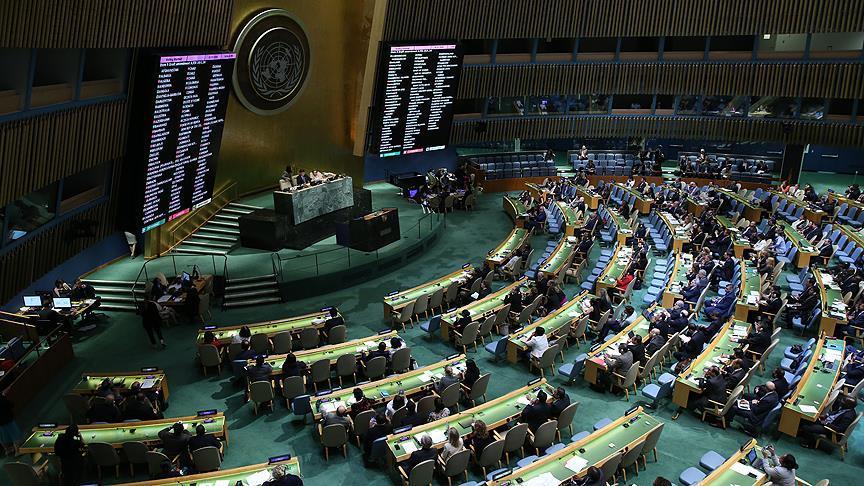 WASHINGTON, 14 Jun 2018 [Fik/News Sources]: A Turkish and Algerian-sponsored resolution blaming Israel for the recent deaths of Palestinians in the Gaza Strip and urging the international community to consider protections for Palestinian civilians overwhelmingly passed in the UN General Assembly on Wednesday

The resolution, backed by Turkey on behalf of the Organization of Islamic Cooperation, and Algeria on behalf of the Arab League, "deplores the use of any excessive, disproportionate and indiscriminate force by the Israeli forces against Palestinian civilians in the Occupied Palestinian Territory, including East Jerusalem", and demands Israel "refrain from such actions".

It further calls "for the consideration of measures to guarantee the safety and protection of the Palestinian civilian population," pointing particularly to Gaza, where more than 127 Palestinians have been killed and thousands more injured by Israeli military fire during mass demonstrations.

The resolution passed in the General Assembly in a 120-8 vote. In all, 45 countries abstained.

Turkey's UN ambassador, Feridun Siniroglu, told the assembly shortly before votes were cast the "draft resolution is not about taking sides".

"It is about supporting de-escalation on the ground. It is about deterring further violence from taking place," he said. "It is a call to the Secretary General to come up with his recommendations on how to protect civilians from further attack. It is a call to all sides to put an end to loss of lives."

"This resolution does not seek to target anyone," he added.

The U.S., which previously stymied a similar effort in the Security Council under its repeated pretext that Israel is "unfairly singled out" at the UN, sought to have an amendment condemning Hamas added to the resolution.

Haley's effort failed to gain the necessary support after a procedural back-and-forth with the assembly president, and the amendment was ultimately rejected.

An attempt led by Arab states to block the motion from receiving a vote in the first place failed.

Following the resolution’s adoption, Turkish President Recep Tayyip Erdogan said during a live TV broadcast that “the U.S. is disappointed once again.”

Also commenting on the decision, Turkish presidential aide Ibrahim Kalin called it “a big success” for the Palestinian cause and justice.

Turkey’s Foreign Ministry also said that members of the prudent international community had shown once again that the Palestinian people would never be left alone.

“We expect the UN Secretary General to immediately fulfill the requirements of the resolution to ensure that the perpetrators of massacres on Palestinian civilians are held accountable,” it added.