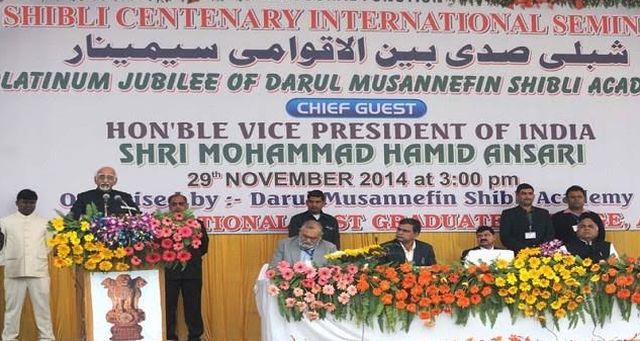 Azamgarh, 31 Mar 2018 [Fik/News Sources]: Darul Musannefin Shibli Academy in its annual Management Committee Meeting elected Mr. Mohammad Hamid Ansari, Former Vice-President of India as its President. Management Committee of Shibli Academy is its supreme body. Very graciously he agreed to serve Shibli Academy and said “I deem it a great honour to be invited by the Managing Committee of the Academy to assume the high office of its President and it shall be my endeavor to assist the Committee in its work of continuing the good work that the Academy and its scholars have done over decades”. Mr. Ansari has served as Vice-President of India from August 2007 till August 2017. He has also served as Chairman of the National Commission for Minorities from 2006 to 2007. He also served as Vice-Chancellor of Aligarh Muslim University from 2000 to 2002. In the past President’s position was held by Maulana Hamiduddin Farahi, Prince Imadul Mulk Syed Husain Bilgirami, Prince Mehdi Yar Jung Bahadur, Dr. Syed Mahmood and Mir Nawab Karamat Ali Khan Mufakkham Jah.

Prof. Ishtiyaq Ahmad Zilli, Director and Secretary of Shibli Academy extended his words of appreciation for Mr. Ansari for accepting the responsibility. On 29th November 2014, Mr. Ansari attended Shibli Academy Centenary celebrations as its Chief Guest. Selection of Mr. Ansari as President of this Century old Institution has boosted the morals of the admirers of Shibli Academy. Dr. Abdullah of Washington DC who is a member of the Management Committee and travelled all the way from Washington DC USA to attend the meeting expressed his pleasure over Mr. Ansari’s selection. He said ” Mr. Hamid Ansari is statesman and apolitical person with vast experience as a foreign diplomat, Vice-Chancellor of AMU and Vice-President of India for 2 terms . His experience and personality will take Shibli Academy to a new level”.

Darul Musannefin Shibli Academy was conceived by Maulana Shibli Nomani and established by his disciples headed by Maulana Hamiduddin Farahi and Maulana Syed Sulaiman Nadvi on November 21, 1914, three days after his death with the objectives to nurture and sustain a body of scholarly authors, to provide a congenial environment for scholars to create, compile and translate literary works of high scholastic and historical value and to undertake printing and publication of the literary works of the Academy. To know more about Darul Musannefin Shibli Academy, visit www.shibliacademy.org